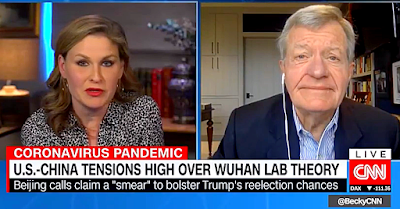 
We all know how much CNN hates the president of the United States and everything he stands for. If you go to CNN's website you will find that around 90% of the articles in the Politics section are harshly critical of the Trump administration, making it one of the most biased news outlets involved in politics in this country.

This makes it more than surprising to see how a CNN anchor is dumbfounded (as you can see in the video) when she hears the words of the former US Ambassador to China during Barack Obama's administration, Max Baucus.

Basically, this former diplomat during his appearance on CNN's International Wednesday show compared the current Trump administration's rhetoric of investigating and attacking China with that of NAZI leader Adolf Hitler and McCarthyism in Washington, D.C.


"The administration's rhetoric is so strong against China, it's over the top. We're entering an era which is similar to Joe McCarthy back when he was red-baiting in the State Department and attacking communism, and a little bit like Hitler in the '30s," Baucus said on the show. Baucus was referring to the more than justified rhetoric of trying to investigate what could be the true origin of this pandemic that affects the whole world and that in the United States alone has costed the lives of 79,526 people as of today, being officially the country with the highest number of deaths in the world.

Was it due to intentional or unintentional wrongdoing by researchers at the laboratory of Wuhan? Could its expansion have been avoided if everyone had been informed before? What role does the WHO play in all this story? In short, a series of questions that will eventually be answered.

So, according to Baucus, these efforts to try to find out the truth of what happened is comparable to the persecution of the Jews or the eradication of any political opposition during the Nazi regime. But it also seems that Baucus has no regrets at all about his strong and very serious statement and continues:

"Now in the United States, if anybody says anything reasonable about China, he or she feels intimidated, worried his head is going to be chopped off. Back in the '30s in Germany, it was very similar.

The look on CNN anchor Hala Gorani's face and her reaction says it all, not knowing exactly what to say in response to such an unfortunate claim.


"OK, I, uh, be- be- before I go, in the comparison you're making here between th- the current U.S., uh, atmosphere in Washington and, uh, Germany in the '30s, I mean that - that's a very - that's a very, you know, kind of - is it, is it, are you being provocative, or do you really believe that there are parallels?"

"I think we're moving in that direction," says Baucus with no hesitation whatsoever.

Well, first of all, the Trump administration has no problem with China as a country. In fact, whenever Trump has had the opportunity to meet with Chinese President Xi Jinping, only good words have come out of his mouth despite the obvious economic warfare between the two countries.

The Trump administration is not really attacking Chinese citizens; it is attacking the Chinese dictatorial and Communist government for stealing billions of dollars from the United States and now they want to investigate how this health crisis of enormous proportions was started. That being said, what does this have to do with the persecution of Jews during Nazi Germany or with McCarthyism?

After Trump was elected president in 2016, Baucus began to establish important business ties with the Asian giant. Today, he is a member of the board of advisors at the Alibaba Group, one of China's largest companies. He also holds a seat on the board of directors of another Chinese company, Ingram Micro.

Baucus' statement had such an impact that it reached the political sphere. The next day, the state GOP condemned this statement: "we should condemn this indefensible statement and Ambassador Baucus should apologize for making such appalling and beyond inappropriate remarks." Moreover, the party goes further and threatens to denounce Baucus if he ignores the petition.