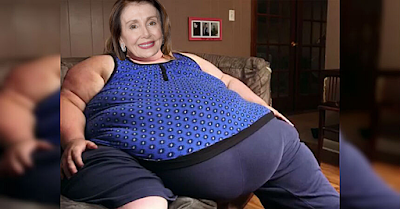 House Speaker Nancy Pelosi (D-CA) said Monday that it is not a very "good idea" for President Trump to be taking hydroxychloroquine as a treatment for the coronavirus.


"I would rather he not be taking something that has not been approved by the scientists, especially in his age group and in his, shall we say, weight group, morbidly obese, they say," Pelosi said during her appearance on CNN's "Anderson Cooper 360.

Trump had just said that same day that he was taking hydroxychloroquine and zinc to protect himself against the coronavirus. Also, the president pointed out to reporters that hydroxychloroquine is a medication that has been FDA-approved for quite some time to treat diseases such as malaria and rheumatoid arthritis. That's how Trump explained it after a White House staffer tested positive for the virus nearly two weeks ago.

Although this is a rather sudden revelation, it's not surprising that Trump decides to take hydroxychloroquine to prevent any potential complications from COVID-19. Trump has been touting and pushing for the approval of this drug to treat this virus, responsible for almost every misfortune that has taken place in this country since the beginning of this year.

"I get a lot of positive calls about it," Trump said on numerous occasions regarding hydroxychloroquine during his daily briefings.


In the aftermath of this revelation, the mainstream media went to work. Lots of media outlets started criticizing the president’s decision, calling in "experts" who claimed that hydroxychloroquine treatment in certain demographic groups was "very dangerous" and could even be deadly.

However, despite the criticism, Trump strongly affirms that he is in perfect condition. Also, Trump is by no means the first person to take hydroxychloroquine and azithromycin (remdesivir) along with zinc sulfate to treat this disease. In fact, a study published this week by several researchers suggests that this drug combination constitutes a very effective and safe treatment for COVID-19, even though it's not risk-free.

Amid all this “controversy", CNN decided to contact with different medical experts and politicians to discuss Trump's announcement, including with the Speaker of The House, Pelosi. During Anderson Cooper's show, Pelosi insulted Trump directly, calling him "morbidly obese," the most severe class of obesity that exists.


Also, Pelosi's statement is totally false. President Trump is not "morbidly obese," although according to his last year's medical exam, the President, who is 6 feet 3 inches tall and weighs 243 pounds, has a body mass index of 30.4, slightly above what would be considered an ideal or healthy weight - it is considered "ideal weight" when the BMI value is between 18.5 and 25.0, according to the CDC.
Therefore, Donald Trump would be a "Class 1 obese." To be classified as Class 3 or morbidly obese, according to the CDC, an individual has to have a BMI of 40.0 or higher.


Moreover, the same medical exam revealed that Trump, who is 73, had no existing heart conditions, and he takes daily medication to control his cholesterol levels.