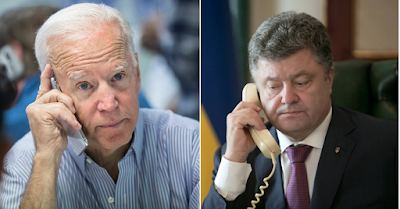 Until now, it was pretty obvious that former vice president and presumptive Democrat nominee for this year's general election Joe Biden and much of his family were involved in a series of business ventures with different corporations in Saudi Arabia, Ukraine, or China, stinky and opaque businesses that suggest that there is some degree of corruption in Joe Biden's inner circle.


The clearest example is his second son, Hunter Biden, who made headlines when it was discovered that he was on the board of directors of a Ukrainian energy company known as Burisma Holdings. The problem is that, to begin with, it was quite remarkable that Hunter was there for two main reasons: firstly, his experience in the energy sector was none, and secondly, he was none other than the son of Joe Biden who was then the Vice-President of the United States.

Joe Biden had allegedly put his son on the board of directors of this company, which, by the way, was owned by a well-known Ukrainian Businessman Mykola Zlochevsky, who was indicted for corruption and for having stolen $2 billion in government funds. In addition, Burisma's company began to be investigated by the Ukrainian Prosecutor General Victor Shokin, who would be fired shortly afterward and, after this scandal broke in the U.S., Shokin personally admitted to different news outlets that he was indeed fired without giving any reasonable explanation when he began investigating the company where Hunter was earning $50,000 every month, thanks to daddy.

Also, late last year, a photo was released showing then-Vice President Joe Biden, his son and his son's partner in the Ukrainian company Devon Archer playing golf in the Hamptons. What were these gentlemen talking about while they were playing golf? In short, a compelling pile of evidence that clearly points to Joe Biden's awareness of the corrupt company Burisma Holdings.


However, the process of impeachment and the outbreak of the coronavirus health crisis has diverted news outlets' attention to this issue... until now.

On Friday, The Daily Wire news site posted a video showing a leaked phone call between Joe Biden and former Ukrainian President Petro Poroshenko, who allegedly ordered the removal of the prosecutor general Shokin, who was beginning to investigate Burisma. The phone call shows clearly that Joe Biden is a corrupt politician, without a doubt:


On the audio you can hear former Vice President Biden talking to Poroshenko about the conditions Ukraine must agree to in order to receive a $1 billion loan.


This matter is already being investigated by the Ukrainian government, which has just opened an investigation, according to the announcement made by Ukraine's President Volodymyr Zelensky during a press conference in Kyiv this week.