ANTIFA rioter in coma after statue falls on his head; GoFundMe campaign raises $45k in 2 days 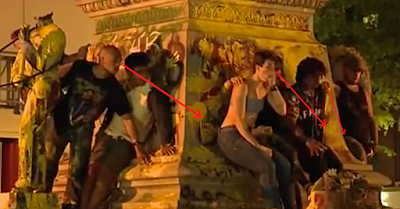 BIG LEAGUE POLITICS
A member of the "ANTIFA" terrorist organization Christopher Green participated in a "protest" in Portsmouth, Virginia, Wednesday, in which a Confederate statue was defaced and torn down with the misfortune that the statue, weighing a considerable amount, struck the anarchist's head, causing significant injuries to his skull.

After the incident, his wife, who was also involved in the riot, immediately called the emergency services who went to the scene and quickly transferred Green to Sentara Norfolk General Hospital. On his way to the hospital, his heart had to be restarted twice and he is now in a vegetative state and his prognosis is still very poor.

His wife, Tonieh Brisbane-Green is worried about her husband and strongly rebuked the aggressive behavior of the other vandals who attended the rally.

Tonieh says she supported the protests but only if they were carried out peacefully, without violence.

She told the local media: "There was no need to do all of that, especially while there were so many people around that statue knowing that somebody's going to get hurt. Doctors were surprised he even made it because that thing is so heavy."

"I just feel like I'm in a dream right now. Like, I just need to be pinched to wake up and everything will go back to normal," said Tonieh.

Tonieh described her husband as a peaceful, innocent bystander, and that the rowdy nature of the crowd made it quite difficult for the medical first responders to assist him on time.

"So he didn't even see it coming, like, 'Oh, let me move out of the way.' And then I heard it was hard for the ambulance to even get to because of the crowds.”

Green's family has started a fundraising campaign on the controversial platform GoFundMe, to be able to cover the expensive medical bills. The campaign, which started running 2 days ago, has already reached its objective ($45,000).