Clyburn: "Trump Is The Worst Thing That's Happened to This Country Ever" 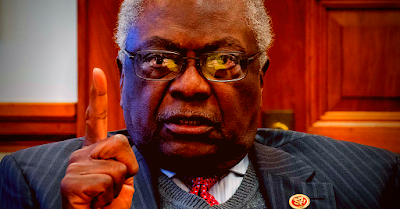 79-year-old House Majority Whip James Clyburn (D-SC) held a video conference interview with Axios news outlet where he told reporter Alexi McCammond that "Trump is the worst thing that’s happened to this country in my lifetime. And it may be the worst thing ever."


Alexi McCammond (reporter): You have said in the last day that President Trump is responsible for more carnage than any president in history. And of course, “American carnage” was a phrase he used in his inaugural address. What do you mean by that?

James Clyburn: Well, what I mean by that is that this president may be the worst president we’ve had since Woodrow Wilson. And so I’m not being partisan there. Woodrow Wilson was not a Republican, and in fact, his home is in my congressional district. But I think Woodrow Wilson set this country back tremendously. He was — this president seemed to be mimicking so much of what he did.


What he did, the day before yesterday, clearing a path for him to walk down as if he is some emperor. That was carnage, the misuse of power. That is violence. I’ve seen the definition of violence, unjust use of force. But I’ve also seen it as being the unjust use of power. This president is using his power unjustly. He’s unleashing violence on this country in such a way that it could very well threaten our existence as a nation.

Here's an excerpt from the interview with Rep. Jim Clyburn: