CNN's Don Lemon, "Every White Person Born on American Soil Is Racist, How Could You Not Be!" 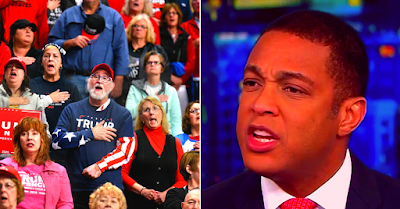 CNN's controversial anchor Don Lemon, also known as "the dumbest man on television" has made headlines again after appearing on the same network's decadent show "New Day" hosted by his peers Alisyn Camerota and John Berman.

During the show's broadcast on Friday, Lemon made a series of despicable, foolish, and surreal statements, "Lemon's style" statements.

Basically, what Lemon said is that the white American citizen is racist in nature. It seems a bit exaggerated but that is exactly what Lemon suggested during a talk on what CNN calls "cultural changes", a euphemism that the news outlet uses to refer to the violent demonstrations and riots that are spreading across the country since the death of G. Floyd.

"Listen, white people are so scared right now to do anything, to talk about anything, to broach these conversations. They're sort of frozen because they - who wants to be called a racist, right? Who wants people to think that they have a racial blind spot? But this is what I think. I think that -this is going to sound weird, but, every year, I have hydrangeas in my yard, they come back a different color, or a tulip or an orchid. And it's not because they're different, it's because the soil is different, right? It depends on the nutrients in the soil. So, if you grew up in America, you came out of American soil, considering the history of this country [...] how can you not be racist? How can you not have racial blind spots? How can you not see that the factory reset in America is whiteness?"

Well, if we start reading his statement, we can see this man's mental deficiency. To begin with, Lemon supports the idea that white people in this country are silent (false, there are more white "protesters" on the streets than blacks) because they are afraid to admit that they are really racist and that they are not capable of appreciating the alleged “racial blindness" that exists in the United States.

Next, Lemon compares human beings to the plants that he grows in his garden, a comparison he uses to explain how people, depending on where they are born and grow up, can be one way or another.

In short, a series of twisted thoughts that are offensive to 75% of the population of this country, at least. It could be said, therefore, that Lemon is calling the culture of the United States ‘racist', when we all know the U.S. is the democratic nation par excellence in the world and an example that dozens of countries, nowadays civilized countries, have and are following.


Another interesting aspect of the footage is the attitude of anchors Asilyn and Berman. Take a look: Do they seem offended by Lemon's statement? Not at all! They even give the impression that everything that comes out of Lemon's mouth is the truth, persuading the audience to believe that Don Lemon is “the king of truths”.

Are you fed up with this race war? Why don't we stop dividing people by the color of their skin? Why do we need to go over old ground again? Let's look to the future, to the November elections, for example, to the things which really matter right now.