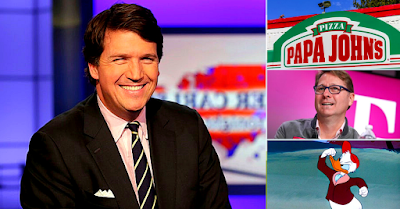 The show of popular Fox News anchor Tucker Carlson is losing more and more advertisers after his controversial statements about the "Black Lives Matter" movement, the main organization behind the riots and protests that are taking place across America.


In particular, of all the companies that have decided to stop advertising on the Tucker Carlson Tonight show, these are the ones that are worth mentioning: Walt Disney Co., Papa John's International Inc., and T-Mobile US Inc. These big companies announced this week that they would stop advertising on Carlson's show after the conservative anchor made a series of comments criticizing the BLM movement.

"This may be a lot of things, this moment we are living through but it is definitely not about black lives and remember that when they come for you, and at this rate, they will," the host said during the broadcast of his show.

Apparently, these words did not sit very well with these companies, or they fear that their ads on the show will seriously damage their reputation by sponsoring a political analyst who sympathizes with Trump's ideas and is openly against the violent riots against the alleged systematic racism in the United States that have already ruined thousands of small businesses, vandalized historic monuments, and created an atmosphere of chaos and violence in major American cities during the last few days.

A spokesperson for Fox News said earlier this week, "Tucker's warning about 'when they come for you' was clearly referring to Democratic leaders and inner-city politicians.  In addition, the same spokesman added that all the advertising spots and profits obtained from the Tucker Carlson Show have been transferred to other programs on the same network, so Fox News does not seem to have lost revenue.


On the other hand, a Disney spokesman for the ABC news site told Deadline that the company's ads were placed on Carlson's show without the entertainment company's consent, allegedly by a third-party ad buyer.

On Tuesday, T-Mobile CEO Mike Sievert replied to several tweets in which he was asked about the current commercial relationship with Carlson's show and whether he defended the anchor's statements or not.

Sievert finally caved in to pressure from BLM activists and after several days of complete silence, he eventually called the comments “evil".

Finally, we have to talk about one of the biggest players in the multi-billion pizza industry, Papa John's, which also announced publicly that it was removing its ads from the late show.  On Tuesday, a company spokesperson published the following message:

"Placement of advertising is not intended to be an endorsement of any specific programming or commentary." Actually, this explanation makes no sense because it is expected that a political show deals with political issues that may well lean to the left or right of the political spectrum.


This "exodus" seems to have been pushed by a series of radical activists who try to do as much damage as possible to those channels of information that they consider "inappropriate", "intolerant", and "sexist".

However, this is not the first time that Carlson's show has witnessed how several advertisers decided to stop advertising on the program.  In December 2018, several major companies such as PepsiCo Inc. and TD Ameritrade Holding Corp. decided to withdraw their ads from the controversial show after Carlson said that "illegal immigrants make the United States poorer, dirtier, and more divided".