Man shoots Antifa thugs in self defense. The rioters start screaming for the cops! 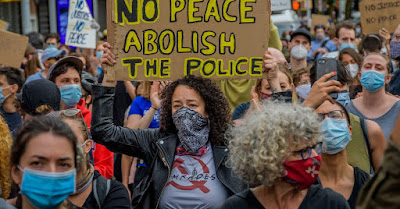 REFORMATION CHARLOTTE
A legally armed citizen was protesting the destruction of a statue by ANTIFA terrorists on Monday evening in Albuquerque, New Mexico. The mafia thugs began to feel uncomfortable with the presence of such individual, so they decided to start chasing him to violently attack him, following the usual "modus operandi" of that organization.

The man, after seeing how the ANTIFA thugs were heading towards him, decided at first to retreat peacefully but this is not enough for the ANTIFAS and soon he was cornered.

Frightened and after receiving several blows from the terrorists, he decided to take out the weapon he was carrying, as we said before, legally. You can clearly listen to one of the rioters say, "I'm gonna f*cking kill you." He had no choice but to pull the trigger, firing 4-5 shots at the violent protesters.

After the shots were fired, the terrorists began to scream desperately, asking for help and you can even hear a voice off-camera saying, "Get his license plate! Get the cops! Get the cops!"

Witnesses to the incident say that the group of rioters did not hesitate to call the police, who rapidly arrived at the scene. This is important to emphasize because we are talking about a terrorist organization that wants to completely abolish the police, so it is quite ironic that the thugs asked the police for help.  If you're in favor of dismantling the police, why are you screaming for the cops? That doesn't make any sense!


The police department of Albuquerque published a tweet yesterday in regards to this incident: "The incident at Tiguex Park has ended peacefully and APD's Emergency Response Teams are leaving the Old Town area. The FBI is currently assisting APD violent crime investigators as they interview individuals who were involved in the shooting."

A few minutes later, at 10:50 p.m. (local time) the same department from the same Twitter account updated the situation: "Message from APD Chief Michael Geier: 'We are receiving reports about vigilante groups possibly instigating this violence. If this is true will be holding them accountable to the fullest extent of the law, including federal hate group designation and prosecution.'"


The investigation is in the preliminary stages. We do not expect additional statements tonight. The victim is reported to be in critical but stable condition.


It's sad, but everything points to the fact that the man who shot in self-defense, after hearing the words "I'm gonna kill you" could easily be charged with a hate crime or even attempted murder.

This shows that the impunity of Black Lives Matter and ANTIFA groups is totally real and the local police forces, commanded by their respective mayors, continue to pander to them and to ignore the second amendment of the U.S. Constitution.
Source: Reformation Charlotte
News in English