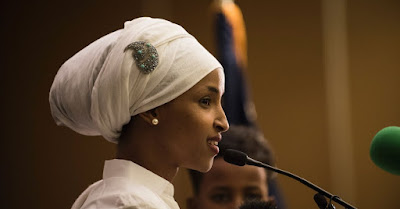 WASHINGTON EXAMINER
Rep. Ilhan Omar (D-MN) is once again at the center of the political controversy in this country after publishing a tweet that literally calls for the disbanding of the Minneapolis Police Department following the cruel death of George Floyd while he was in custody at the hands of an officer from the same department a week ago.
In the tweet, the Somali politician said, "The Minneapolis Police Department has proven themselves beyond reform. It's time to disband them and reimagine public safety in Minneapolis. Thank you to @MplsWard3 for your leadership on this!"

The Minneapolis Police Department has proven themselves beyond reform.

It’s time to disband them and reimagine public safety in Minneapolis.

Thank you to @MplsWard3 for your leadership on this! https://t.co/AQfHM5M6eR

Omar introduced four bills this week aimed at blaming his city's police force for Floyd's death and for the riots that followed his death, as well as for the brutality that police used to stop the violent and criminal riots perpetrated by many individuals belonging to terrorist organizations such as ANTIFA.
Omar's announcement that she wants to dissolve the police department comes at the same time that major leaders of this country, as well as celebrities and sports figures are joining a movement with the slogan "Defund the Police" whose priority is to do as much damage as possible to police forces nationwide by denouncing their "extreme brutality".
Former Democrat presidential candidate Bernie Sanders has also dedicated some words to the police of this nation on his personal Twitter account.
"Every police department violating people's civil rights must be stripped of federal funding," the Vermont state senator said Thursday. Also, this tweet was retweeted or shared by one of the members of the well-known group "The Squad" Rashida Tlaib.
The mayor of the second-largest city in the country, Eric Garcetti, also expressed his support, introducing a bill that would reduce the budget for the Los Angeles Police Department (LAPD) by $150 million, money that would supposedly be used to fund those areas worst hit by police brutality.
Source: Washington Examiner
News in English