THIS IS WAR! - Thomas Jefferson Statue Destroyed By BLM Activists 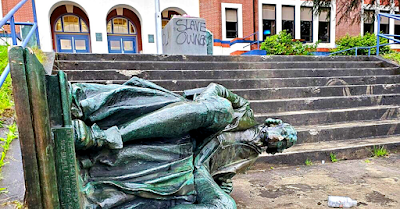 Today, June 16, 2020, is a sad day for The United States of America. The image you can see above shows a statue that has been pulled of its base, pulled to the ground by a large group of far-left terrorists supported by the Democrat party. Another Confederate statue destroyed? No. This individual is none other than Thomas Jefferson, one of the founding fathers of the U.S., 3rd President of the Nation, and the main author of the Declaration of Independence of 1776, the most influential document in the history of democracy, not only in this country but in the entire world. Unbelievable, right?

The consequences of this terrorist attack - because that's what that is, a terrorist attack - could be of astronomical proportions. This incident also proves that President Donald J. Trump was right when he said in 2017 amid the removal of several Confederate statues in Virginia: "What's next? Jefferson? Washington?" BLM activists are starting to pull down statues of Thomas Jefferson.

For those asking why would they do that? Well, the reason is simple: He was a slave owner. The anarchists who now have taken control of the democrat party think that this is a "new revolution" that will lead to prominent changes and a better future. Several powerful leftist personalities - I think there's no need to mention them, we all know who they are - have called it such on social media. But, in reality, this basically shows that BLM rioters and the left in this country are CALLING FOR WAR, and I'm not the only one who thinks so.

On Monday, Rasmussen Reports, especially known for its tracking polls, published the results of one of its latest polls: "40% of GOP Voters Think Civil War Likely." The survey of 1,000 likely voters was conducted on June 11 and 14 and the results are impressive, concluding that 34% of likely U.S. voters think the United States will experience a second Civil War sometime in the next five years.

The violent and savage protests and riots that have been taking place in the country for more than 2 weeks now where thousands of small businesses and other private properties have been destroyed, looted, and burned down; the removal of Confederate symbols, names, and prominent monuments that, like it or not, are a reflection upon our Nation's history; the support of these violent riots by the democrat party; and the promotion of the "defund the police" movement by famous celebrities and politicians in the country. All of these elements are clear potential "catalysts" for a Second Civil War.

The removal of Thomas Jefferson's statue in Portland is something that cannot be accepted by any American citizen who is in their right mind. According to Dr. Clarence Jones, who helped Martin Luther King Jr. write his "I Have A Dream" speech, "neither Washington nor Jefferson should be judged in the same way as Confederate figures because they devoted their lives to saving and founding this country."

Ok, both George Washington and Thomas Jefferson owned slaves, that's undeniable. But none of them led the nation in treasonous insurrection to overthrow the government they had formed to preserve slavery.

It was Jefferson the first person in the history of humankind who wrote: "We hold these truths to be self-evident, that all men are created equal, that they are endowed by their Creator with certain unalienable rights, that among these are life, liberty, and the pursuit of happiness."

On the other hand, George Washington was the only member of the Virginia aristocracy, during the Revolutionary era to free his slaves. "He freed them in his will," Pulitzer Prize-winning historian Joseph J. Ellis wrote in his book "American Sphynx: The Character of Thomas Jefferson and His Excellency: George Washington".

In conclusion, the destruction and the defacing of Thomas Jefferson's statue is another attempt by the left to trigger a second civil war in the United States.