WATCH: CNN's Don Lemon Says "America, Open Your Eyes. We Are Teetering on a Dictatorship" 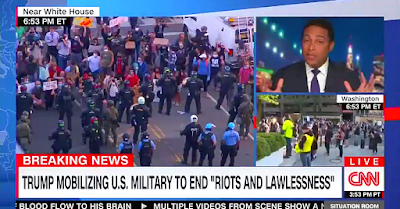 CNN anchor Don Lemon warned the entire country during the airing of his program, right after Trump's speech at Rose Garden on Monday evening about the consequences of the president's actions.

In that same speech, President Trump expressed his sympathy over the incident last week where a police officer in Minneapolis killed a Black citizen, allegedly causing his death by asphyxia, kneeling on his neck. However, Trump recalled that as president his duty was to maintain order in the streets and that he would try to defuse non-peaceful riots by using the country's military forces if the different states are not able to control them, stressing the power of the U.S. military.

The anchor, as usual with everything the president says, expressed his great discontent after the speech:

"This was a made-for-television moment. And what I wanted to say after that and that I believed to be true and that I know to be true now is that earlier on that phone call - when the president said, 'You are being weak, you have to show strength' - those were the orders from the commander in chief," said Lemon.

So far, Lemon doesn't seem to be saying any nonsense and displays a soft tone when he talks about the president. But, from there, her speech went from bad to worse:

"For this very moment that just happened right before our eyes, why were we pretending otherwise? Open your eyes, America. Open your eyes. We are teetering on a dictatorship. This is chaos. Has the president - I'm listening, is the president declaring war on Americans? What is happening here? He is saying that he wants to protect peaceful protesters at the same time sending law enforcement and military into the streets to push peaceful protesters back, to be aggressive with peaceful protesters. He is doing the exact opposite of what he said in that speech.


Just to clarify, it seems that Lemon didn't get the president's message. Indeed, President Trump does not condemn the peaceful protests taking place on the streets of the country's major cities. But, obviously, if the riots and violence continue, he will have no choice but to send the army to the various hotspots to put an end to these riots, as any leader would do in their own country in a similar scenario.

What is the president supposed to do in your opinion, Lemon? Let the riots, the looting of shops, the burning of buildings, the assaults on police stations continue?

In addition, the controversial "CNN Tonight" host warned his partner Wolf Blitzer that Trump "is playing a very, very dangerous game here," emphasizing that "people are fed up and angry and all they do is fight to protect their right to peacefully demonstrate.

In addition, according to Fox News, in 2018, Lemon tried to publicly defend the role of the recently declared terrorist organization “Antifa", which has been responsible for much of the street unrest in the last few days.