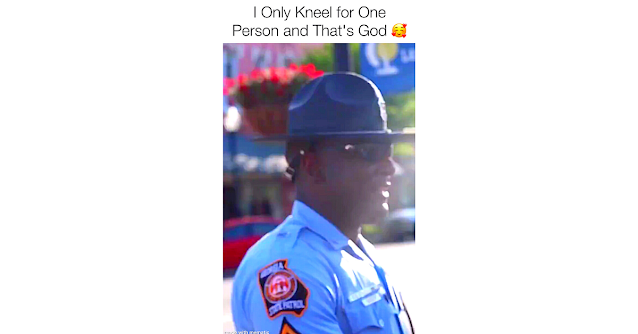 A black Georgia State Trooper is gaining immense popularity in the last few hours after a video went viral on social media where he appears telling a "Black Lives Matter" activist that he only kneels for one person: God.

The video, which first appeared on YouTube and was later posted on Twitter by "Students for Trump" founder Ryan Fournier on Saturday afternoon, has reached over 60k likes and 24k retweets to this date.

In the video, we see Trooper O'Neal Saddler on duty in his uniform during protests in Hartwell, Georgia, a town of just under 5,000 people about 100 miles northeast of Atlanta.

Once Saddler appears on the scene, one of the protesters asks him to kneel to commemorate deceased George Floyd, a gesture that has become popular among activists, celebrities, and popular political figures during the demonstrations. Saddler refused, instead arguing that he only kneels for one person, God.

"If I didn't have any respect, I wouldn't be here. I was supposed to be out of town this weekend with my wife. I took off today, this weekend, but I'm out here to make sure y'all are safe," Saddler told the BLM activist.

"Don't go there with respect, OK? I have much respect, but I only kneel for one person," added the Georgia State Trooper.

But which person was Saddler referring to? If you listen closely to the video, you can hear it very clearly as an off-camera voice says, "And that's God," just before Saddler says, "God."

As we know, all of these demonstrations are against the alleged systematic police brutality and racism in the country, just after a video was published showing the wrongful death at the hands of a police officer from the Minneapolis Police Department, Derek M. Chauvin, of African American citizen G. Floyd over a week ago.


His death has triggered a wave of protests across the country, which at the same time have called into question the importance and real value of the United States' law enforcement authorities, who are putting their own lives at risk to ensure the safety of all American citizens each and every single day.