WATCH: NY TIMES Reporter, "Destroying Property Which Can Be Replaced Is Not Violence" 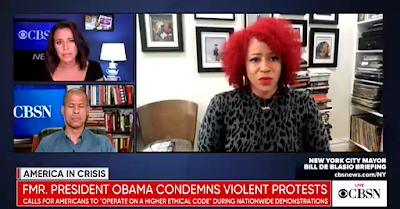 
A New York Times reporter stunned half the nation after a controversial statement she made during her appearance in CBS News this morning. The reporter said that "looting is not an act of violence" because "property can be replaced".

This statement comes right in the middle of demonstrations being organized across the country to protest against the cruel death of George Floyd, an African American citizen who lost his life after a cop knelt on his neck for more than 8 minutes.


Many of these protests have led to numerous riots, with rioters robbing small businesses, looting shopping malls, burning buildings, and police cars, and even some altercations resulting in human deaths.

At the same time this is happening in our country, reporter Nikole Hannah-Jones, speaking for CBS News, says, "Violence is when an agent of the state kneels on a man's neck until all of the life is leached out of his body. Destroying property, which can be replaced, is not violence. To use the same language to describe those two things is not moral."

This statement actually harms the image of a newspaper that is in a downward spiral and whose veracity is increasingly questionable. Such is the bias of the New York Times that the news outlet was forced to modify a front-page headline that read "As Chaos Spreads, Trump Vows to 'End It Now'" after several Democrat politicians criticized it on Twitter.

"You've got to be kidding me," replied AOC on Twitter after reading the NYTimes cover.

"The New York Times headline writers are going to Both Sides the country to death," wrote Sen. Brian Schatz (D-HI) on the social network.

"The President is acting like a budding dictator. Headline fail, @nytimes," tweeted Julian Castro, who was Secretary of Housing and Urban Development under the Obama Administration.

Eventually, the decadent New York Times caved in to pressure and had to change the front-page title to: "Trump Threatens to Send Troops into States.” This just shows how the New York Times is a newspaper written by and for the left of this country.