WATCH: NYC "Peaceful" Protester, "Our ancestors built this land... If I want to burn it, I will" 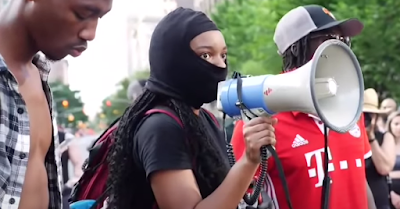 BREITBART
On Saturday, during an intense day of protests in New York City, an activist from the "Black Lives Matter" movement picked up the megaphone and declared that they had the right to "burn this motherf*cker to the ground" while at the same time encouraging the crowd not to use violence.
During one of the many protests that took place on Saturday in the Big Apple, a BLM activist urged the crowd not to attack the NYPD officers while she shouted that she had every right to burn down this city.
The young activist said:
"Our ancestors built this land. And if I want to protest on it, I will. If I want to burn it, I will. And last thing, if I want to burn this motherf*cker to the ground, I will."
The irony was, that after saying these words, the same protester continued:
"And I just want to emphasize that this is a peaceful protest. I will not condone ... I will not condone any of ya'll hitting police officers and burning stuff. Please do not tarnish our name. This is a peaceful protest."
Here's the video shared exclusively by Breitbart news site:
Source: Breitbart
News in English