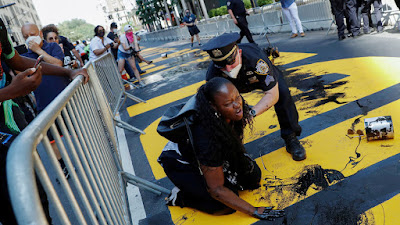 The New York Post reported on Sunday two African-American women, supporters of the "Cops Lives Matter" movement, who pulled out paint cans and poured them all over a Black Lives Matter mural on Fulton Street, Brooklyn Saturday night.


One of them, Bevelyn Beatty, is known to have previously smeared the famous BLM mural in front of Trump Tower on Fifth Avenue. Beatty has a Facebook page where she has been uploading videos over the last few days, appearing usually with other people defending the same cause, in which they can be seen defacing several BLM murals all over New York, the last ones located in Harlem and Brooklyn.

In the first video on her Facebook page, Beatty is seen in Manhattan around 3 p.m. Saturday driving a van with the trunk loaded with black paint cans. Two women accompanied her. They then started throwing paint and scattering it all over the 5th Avenue BLM mural promoted by New York City Mayor Bill de Blasio himself.

"We're not standing with Black Lives Matter. We want our police. Refund our police," claimed Beatty as he continued to spread the paint and to the amazement of passers-by. Later, Beatty was arrested and charged with criminal mischief but was released hours later.

In her most recent video, uploaded Sunday morning, Beatty and another woman are seen dumping black paint on another BLM mural, this time on Fulton Street, Brooklyn.


"Ladies and gentlemen, we're in Brooklyn and it ain't over," she said. "Jesus matters. We're taking our country back. We're taking it back. And let me tell you something, the police need our help. They can't s and alone. Don't just sit by idly and watch your country go to the ground," shouted Beatty.

Several people walking in the area approached the two women, most of them angry about what Beatty and her partner were doing there. In the video you can see how pedestrians confronted them, shouting at them and asking them to stop.


As Beatty and her partner leave, residents are seen rushing to pick up the debris left at the site of the incident.