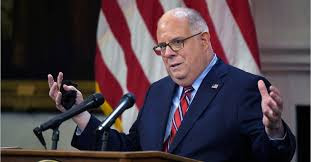 NY POST: A member of Maryland Gov. Larry Hogan’s administration has been fired for “divisive” Facebook posts supporting the teenage gunman charged in the deadly shooting at protests in Kenosha, Wisconsin.

Arthur “Mac” Love IV, who previously served as the deputy director of the Governor’s Office of Community Initiatives, was terminated Saturday after posting memes sympathizing with Kyle Rittenhouse, the 17-year-old from Illinois accused of killing two and seriously injuring another during an Aug. 25 demonstration in response to the police shooting of Jacob Blake, the Baltimore Sun reports.