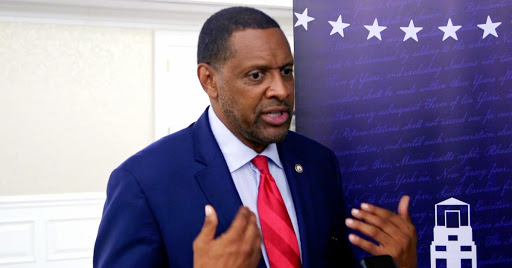 FOX: An angry crowd surrounded and yelled at Georgia state Rep. Vernon Jones Thursday night as the Democrat was leaving President Trump's Republican National Convention (RNC) event at the White House, as happened with several other people in the area, including Sen. Rand Paul, R-Ky.

Jones' vocal support for Trump has vaulted him into the national spotlight, landing him a speaker spot at the RNC on Monday night. There, Jones had accused fellow Democrats of not wanting "Black people to leave their mental plantation" and of "pandering" to the Black community.

As Jones left the White House on Monday, several social media videos showed a group of Metro Police Department (MPD) officers surrounding Jones and using their bicycles as barriers between him and the angry group of people who had surrounded him. One video showed protesters specifically calling Jones a "disgrace" and the ugly racial slur "house n-----."

Police escorted several guests and delegates from GOP convention to their hotels, including Georgia state Sen. Vernon Jones, as protesters heckled them in the street. Jones, a Democrat, spoke on President Trump’s behalf. #Dcprotests pic.twitter.com/F9GNBep6KO