You can't make this stuff up: Pelosi now says Biden shouldn't 'legitimize' Trump by debating him 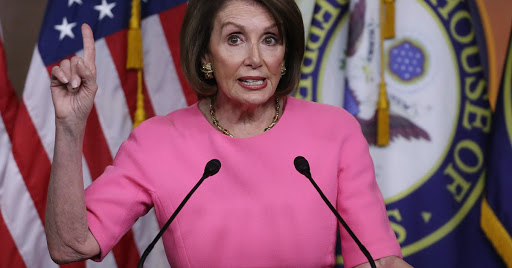 Newsmax: House Speaker Nancy Pelosi said she would nix all presidential debates ahead of the November election, The Hill reports.

She said Trump will “probably act in a way that is beneath the dignity of the presidency,” during debates. She called his actions during the 2016 debates with former Secretary of State Hillary Clinton “disgraceful.”

“He does that every day,” she noted. “But I think he will also belittle what the debates are supposed to be about.”

Rather than debate in “an exercise in skulduggery,” Pelosi suggested Trump and Biden take separate stages and answer questions about their policies in a “conversation with the American people.”

She noted that the Biden campaign “thinks differently about this.”

A Biden campaign spokesman said the former vice president looks forward to debating Trump. Democrats have been divided on whether Biden should participate in presidential debates, The Hill reports. Some say he should skip out while others say he shouldn’t be afraid to take on the president.

“We’ve had presidential debates for a long time now, and it’s been a way for a lot of people around the nation to be able to see the candidates in action,” Sen. Elizabeth Warren, D-Mass., said of the debates.