December 31, 2019
Robert Kiyosaki (1947) is an entrepreneur, investor, writer, and public speaker on financial and business topics. Founder of Cash Flow Technologies, he started to be recognized after the release of his successful book "Rich Dad, Poor Dad". He's the author of multiple books about financial issues, among which we can highlight, besides the one already mentioned, "Cashflow Quadrant," "Why We Want You To Be Rich," or "The Business of the 21st Century". 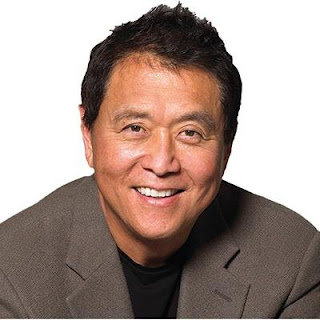 Now, let's review some of his most famous quotes, collected from Kiyosaki's work:

1. There's a difference between being poor and having no money. The latter could have no money during a certain period of time, whereas the other is eternally poor. The same happens on the opposite side: one thing is to have money and another thing is to be rich.

Your wealth (or poverty) is the result of who you are, and not of the amount you lose or gain. It's a question of mentality, philosophy of life, of how you face the problems and reality, ultimately, a question of attitude. The money without financial intelligence is lost quickly, in the same way as the lack of money, with financial intelligence, may allow you to recover sooner or later. Therefore, it's all about learning how the game of money works. Robert Kiyosaki himself said: "People are poor because they know nothing about money. People learn at school to work for money instead of learning how to make money work for them. That's the power of money and the lack of knowledge on it is what explains why there are so many intelligent poor people in the world."

2. Never say the words "I can't afford it" and change them for "how to get it." The former provokes sadness, the desolation that leads you to despair and depression. Whereas, the latter one opens lots of new opportunities, excitement, and dreams.

Limits don't exist, the only limits are in your mind. Kiyosaki claimed: "The words 'cannot be done' make many people weak and blind to people they can see, saddens happy people, converts brave people into cowards, they eliminate brilliance from sagacity, make rich people think poorly and they limit the potential achievements of that great person who inhabits in ourselves." Words are like energy, they create the reality, therefore you should be very careful of what you say. Everything in this life is about studying, testing, failing, learning and trying again and again until you find the path you had fantasized. If you really want to make money, don't invent excuses and work hard to find out alternatives to get it. The number one factor to be rich is to have the determination to want it.

3. The important thing is not to have fantastic ideas but to become a great businessman. Good products are everywhere but the great businessmen are scarce and rich.

Kiyosaki says: "Most of the people think that entrepreneurs need to feel a passion for their idea. This isn't true, what entrepreneurs actually need is to have a passion for business. The idea is only the medium that allows you to achieve your goal." It's quite strange that a very good product sells itself. Very often, companies that succeed are managed by intelligent people who know how to build a team, who are able to sell, who feel very comfortable talking to other people, who know how to innovate. In short, all characteristics of successful businessmen. The key is management. A very frequent error among entrepreneurs is the following: if I have something original and fantastic, everyone is going to buy it. Except in a few cases, that hardly ever happens.

4. I have a lot of money because I was determined to make more mistakes than most people and to learn from them. Most of the people haven't made enough mistakes or they continue making the same mistakes again and again. Without mistakes and without learning, no 'extraordinary' things happen in real life.

Winners are characterized because they lose more frequently than losers. Losers are losers because they are not willing to lose. No risk, no earnings. When someone takes risks, many times things don't happen as expected. You always have to look forward and keep on insisting. Losers avoid failure, and precisely, is failure what transforms losers into winners. An important part of success depends on how you manage failures throughout the journey. The key is in three pillars: humbleness to admit the mistakes made, intelligence to learn from them, and discipline to correct them. Winning is having no fear to lose.

Financial freedom looks for ways to earn more, spend less, and live better. To do this you have to focus on how to build a series of assets that produce recurrent profits in order to cover all costs, whether you're working or not. This is a key difference between different people: rich people focus on their assets column, whereas the rest of the people focus on their liabilities column. It's the difference between working to make money and to make money work for you.

6. Your mind is your main asset. So, be very careful with what kind of advice you allow to enter into it and from whom it comes.

In the same way, we put a lock in the doors for not letting undesirable people come in, we should shield our mind in order to avoid toxic messages to get into it. We all contain in ourselves a winner and a loser who are fighting each other continuously. We should dominate our minds so that the excitement of winning is always greater than the fear to lose. Kiyosaki writes: "99.99% of success depends on our mental attitude and on how you face life events." Therefore, the most powerful asset we have is the mind. Financial freedom is not only money but also a mental, emotional, and learning process. Wealth is a state of the mind. The advice here is clear: invest in your mind and you'll fill your pockets.

7. Money is not the most important thing in life but it affects everything that is really important.

With money, you buy the food you eat; with money, you pay the house you live in; with money, you satisfy your transport needs; with money, you can enjoy health insurance in case of illness. The most basic needs of human beings (food and shelter) are satisfied thanks to money. For that reason, money is important. Thus, knowing how money works is not a minor issue. If you consider money to be an insignificant issue, you will sooner or later pay the consequences. Money, regardless of the amount you possess, has to be taken care of and learn to manage it. The simple effect of inflation takes away our profits; the same thing happens with financial commissions or with taxes. Money without attention evaporates.

8. Money won't make you happy if you are an unhappy person.

Although money is very important for everything, its lack under a determined level generates a greater impact than its impact above the already mentioned level. In other words, it has more weight as a "hygienic" factor than as a "motivational" factor. This means that under a level "x", its lack causes unhappiness but above this level, its presence doesn't cause more happiness. Happiness is, especially, an inner state that depends on who you are. From a specific level on (everyone has their own,) if you are not comfortable with yourself, you won't be comfortable with money either. You will "circumstantially" satiate your unsatisfaction, but never "structurally". If your objective is to make money for "being above everyone" or for "showing off your talent," money will never make you happy.

9. Having discipline provides you with a better quality of life.

Robert Kiyosaki points out: "My poor dad thought that money made you rich. My rich dad said that financial habits are what made you rich." And there are two very important habits. In the first place, the habit of saving: the important thing is not how much money you make but how much money you preserve. Because of this, it's fundamental to have discipline at the time of saving some of your monthly revenue. An important difference between the rich and the rest of the people is that the former buy the fancy stuff in the end, whereas the rest of the people buy the fancy stuff first. Therefore, saving capacity is limited. You have to be a long-distance runner and think in the long term. The second important habit is the habit of investing. Money has to be working by knowing that interests generate interests. It's the magic formula for compound interest. The larger the capital, the larger is the base upon which are calculated the new returns. And, for that, the best ally is time. The sooner you start, the sooner you will achieve financial freedom, and with less effort.

10. If you want to succeed, you have to learn to focus.

You cannot touch all the sticks at once. Apprentice of everything, apprentice of nothing. It's necessary to focus, and that demands a strong attitude to say "No" to a lot of things you would like, to focus on what's important: your purpose in life. You'll need lots of hours to dominate a specific sector or activity. Studying hard, risking, learning from mistakes and moving forward demands a special dedication. And all of that without getting remuneration as compensation for all those years of trial and error. The difference between a candidate and an expert is the focus. A lot of candidates looking to become successful entrepreneurs want to do it fast. Therefore, when one of the paths fails, they change it for another. The problem is that they never succeed because they didn't put in the required time and effort for it.
People