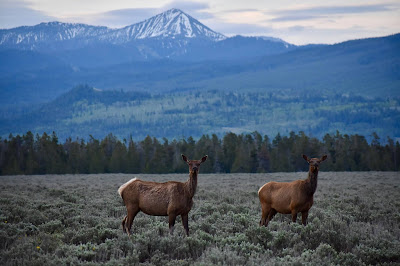 Idaho is one of those places you have to visit at least once in your lifetime. It's green and vibrant landscapes, beautiful lakes, amazing canyons... If you like U.S western culture, Idaho is a must destination. Also, you can enjoy a warm and peaceful welcome from its people. You'll see that after reading these 50 facts, you will want to be in Idaho, the "Gem State." Despite being the 12th least populated state, its cities and villages are full of hidden facts that you probably didn't know. So, let's jump into the facts!
1. Idaho is a state bordered by 6 others: Washington, Oregon, Nevada, Utah, Wyoming, and Montana.

2. Idaho is the 14th largest US state; It’s the 12th least populous and the 7th least densely populated.

3. In the early 19th century, Idaho was part of the so-called “Oregon Country,” an area disputed between the United States and the United Kingdom. It became US territory after the signing of the Oregon Treaty of 1846, however, Idaho continued to be part of a larger territory (Oregon Territory and then after Washington Territory.) It was in 1890 when Idaho became the 43rd State of the Union.

4. Idaho is one of those 13 states with 2 different time zones: The northern area bordering the state of Washington uses the Pacific Time Zone, whereas the rest uses the Mountain Time Zone.

5. Idaho is famous for its forests among other things. This conception is very sensitive as 38% of Idaho’s land is held by The US Forest Service, the greatest percentage in the entire country.

6. Although Idaho’s economy depends highly on agriculture, forestry, and mining, the state has also a good number of tech and scientific companies with headquarters in it. The Idaho National Laboratory is the country’s largest Department of Energy facility.

7. Idaho is famous for its potatoes. It produces about 30% of total US potato production (about 14 billion pounds each year.)

8. Idaho is often called the “Gem State” and it’s not by coincidence: The nickname comes from the abundance of natural resources, mountain landscapes, and large lakes. Also, Idaho possesses a wide variety of gems (you can find 72 different gems only in Idaho.) and it is the state with the highest rivers length (3,100 miles in total.)

9. Although it’s not clear enough, many experts believe the name ‘Idaho’ comes from Shoshone language (used by native American people that inhabited the region before the European settlement) term that means “the sun comes from the mountains” or “gem of the mountains.” A 1956 Idaho history textbook says that the word ‘Idaho’ consists of three parts. The first part is “Ee”, which in English conveys the idea of “coming down.” The second is “dah,” a Shoshone term referring to both “sun” and “mountain.” The third syllable, “how” denotes exclamation in the Shoshonean language, like the exclamation mark in English. So, when translated to the English language, it might mean something like: “Behold! The sun coming down the mountain.” There are many other versions of the origin of the term, but this is the most accepted one.

10. Idaho’s highest point is located at the Borah Peak (12,662 feet) in the Lost River Range north of Mackay.

11. Many places and locations’ names in Idaho seem to come from the French. Why? Because of the early European settlers in the area, who were French-Canadian trappers.

15. Idaho is a state with a significant white race predominance. In 2016, 91% of its inhabitants were white. However, it is expected to this percentage to decrease gradually over the next couple of years, looking at past historical data.

17. The most popular religion in Idaho is Evangelical Protestantism (21%), followed by Mormonism (19%), Mainline Protestantism (16%) and Catholicism (10%).

18. Idaho is considered of the most small-business-friendly states, based on a study carried out in 2014, conducted by 12,000 small business owners across the United States.

19. Idaho’s GDP is approximately $80 billion, having the 10th lowest GDP of all US states and the 2nd lowest GDP per capita, only surpassed by Mississippi.

20. The state has its own official song. It is titled “Here We Have Idaho.” The song was composed by Sallie Hume Douglas and written by McKinley Helm and Albert J. Tompkins.

22. The state is known nationwide for its canyons, valleys, and rivers. But, did you know it has the deepest canyon in North America? It is called the “Hells Canyon” and it is located in the border between Idaho and Oregon. It presents a depth of 7,993 feet, deeper than the most famous canyon in the US, the “Grand Canyon” in Arizona (6,093 feet.)

23. There are few places on Earth where you can find the so-called “star-garnets.” India is one of those places and, interestingly, they can also be found in Idaho.

24. Behind the state seal of Idaho, it’s hidden a very interesting fact: It is the only state seal in the United States that has been designed by a woman. The woman’s name was Emma Edwards, whose design was finally chosen in 1891.

25. Did you know it is illegal for a man to give their beloved a box of sweets that weights more than 50 pounds? Hard to believe, isn’t it? Well, except it is false. In the last couple of years, many online sites have claimed this law to be true, including the Huffington Post. However, lawyers and attorneys of the area have dismissed that statement.

26. In the Idaho City of Pocatello, also known as the “US Smile Capital,” it is illegal to not smile. Yes, you’ve heard it right. Pocatello passed this law after a very harsh winter and somehow managed to remain in the books. Obviously, the punishment for not following this rule is a “joke” arrest nowadays.

27. Idaho’s State Penitentiary is known as a haunted location. Nowadays, it is called the “Old Idaho Penitentiary State Historic Site” and it was a functional prison from 1872 to 1973, in the east of Boise, Idaho.

28. Heaven’s Gate Lookout in Weiser, Idaho, is a place where you enjoy the nature around you and especially… The sights from there. In fact, you can see the states of Washington, Montana, and Oregon from that one single location.

29. There is a ski-resort in McCall, Idaho that is home to the Brundage Bra Tree. It is very well known by locals as women throw their bras while riding a chairlift.

30. There’s one tale redacted by a Mormon colonizer called Joseph C. Rich, about a weird creature in Bear Lake, Idaho. The creature is known as the Bear Lake Monster and it has scared many kids in the area.

31. Idaho has the highest navigable river in the world. It is the Saint Joe River and it is located at an altitude of 6,487 feet.

32. Idaho, according to the Guinness World Records, holds the world’s longest straw bale maze in Rupert, in southern Idaho.

33. The most expensive bull in history comes from Idaho. The price: $600,000. The reason behind this astronomical amount of money was that the bull was a Hereford (a bull breed) that weighed 1410 pounds and its lineage was impeccable. The buyer of this 13-month-old Hereford bull was Miles McKee Syndicate in Iowa. They were planning to use the bull as a stud.

34. Another worldwide record for Idaho: The world’s longest floating boardwalk is in Idaho, precisely in Lake Coeur d’Alene and is 3,300 feet long. Perfect for people who like to walk along the beach shore.

35. In Cottonwood, Idaho, you can sleep and have breakfast in the only dog-shaped hotel in the world. It is called the “Dog Bark Park Inn,” and sure it would be a true paradise for dog lovers.

36. In a small city called Island Park, in Fremont County, you can walk along the world’s longest main street, which is 33 miles long.

37. The Coeur d’Alene Resort is home to the only artificial 14th hole island. If you like playing golf, now you know where to go!

38. Just 30 minutes north of the sweet little town of Elk River, Idaho, visitors can stare at the “Champion Tree of Idaho,” with a trunk of 18 feet in diameter and 170 feet tall, it is precious beauty, just look at the image in this page.

40. The state’s fruit is the Huckleberry, which makes sense because Huckleberries are very good for starch digestion, and potatoes contain a lot of starch.

41. Not only Idaho is known for its potatoes. 85% of commercial trout in the USA comes from Idaho, more specifically from Hagerman Valley.

42. Evil Knievel, an American stunt performer, and entertainer challenged himself to jump over the Twin Falls, in perhaps his most famous and memorable stunt, which turned to be a fail. He used a rocket (instead of his classic motorcycle) and suddenly the emergency parachutes prematurely opened. The rocket started to precipitate into the abysm and many people thought Knievel was going to die. Fortunately, he managed to survive.

43. Have you ever seen a license plate from Idaho? The word “potato” was first used in the state’s license plates back in 1928. We’ve just explained why there are potatoes in them.

44. In the capital of the State, Boise, it’s held every year the Treefort Music Fest. It is one of the most successful Indie Rock music festivals in the entire country.

45. The official state’s amphibian is the “Idaho Giant Salamander.” It’s mainly located in forested watersheds from Lake Coeur d’Alene to the Salmon River, in Idaho and in some areas of the state of Montana.

46. Idaho is well known for its several “ghost towns” all over the state. The most popular ones are Silver City, in southwestern Idaho, and Burke, in the north of the state. These two towns attract thousands of visitors each year.

47. The official state horse, the Appaloosa was brought by the Spaniards in the 1700s and raised by the Nez Perce tribe. Settlers called the spotted equines “Palouse horses” after the Palouse River and the name hasn’t changed since then.

48. Idaho’s State Capitol Building is the only one in the US heated by geothermal energy. The heat comes from hot springs located 3,000 feet underground.

49. Arco, in Idaho, is just a small town of roughly 1000 people. What special fact has this little town to offer? Well, it was the first place in the world to be lit entirely by using only nuclear power. The State of Idaho doesn’t make use of nuclear energy though. The most popular energy sources are: Hydroelectric, wind, natural gas, and coal.