October 24, 2019
Name: Yellowstone National Park (United States of America).
Location: It is situated in northwestern Wyoming, occupying areas of the states of Montana and Idaho in a smaller proportion.
Area: It is one of the biggest national parks in U.S: It contains 2,219,791 acres of virgin land. 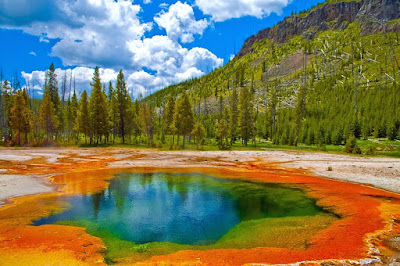 In the mid 19th century, the landscapes of Yellowstone were a complete mystery. With the exception of some trappers and gold diggers, no caucasian man had dared to step into its plains and forests. Incredible stories about springs that threw water to the sky, boiling waters which covered in green and ochre the grounds, boiling muds and golden yellow mountains, sparked the curiosity of a bunch of scientists and adventurers who hurried up to move to that, at the time, unknown place.

The expeditions of David E. Folson in 1869 and Ferdinand V. Hayden, two years later, showed the world the amazing phenomena happening in Yellowstone. Just one year later, the United States Congress declared the Yellowstone National Park - in the northwestern corner of the state of Wyoming, with over 2 million acres, grasping some parts of the Idaho and Montana states - the first protected area in the world.


Back then, president Ulysses S. Grant dedicated a few words to this marvelous natural jewel: "Yellowstone constitutes, according to the terms of the current law, a reserved zone withdrawn from settlement, occupancy and sale. The land is reserved for the creation of a public park or a pleasuring ground for the benefit and enjoyment of the people."

These words of the president of the United States at the time, Ulysses S. Grant, reflected in the "Act of Dedication" of Yellowstone, configured the National Park concept and initiated a new type of space conservation philosophy. Withdrawn from any productive use which could affect the richness of its natural values, Yellowstone was aimed at bringing aesthetic and recreational pleasure for all human beings.

The sowed seeds in the boundaries of the state of Wyoming had just sprouted, and nowadays the Earth contains more than 8,000 protected zones, spread throughout all nations worldwide.

Yellowstone maintains today the splendid wildness found by the pioneers. It offers open landscapes, dominated by rolling pasturelands, broken by forests, peatlands and shallow water lagoons. The central part of the park is occupied by a volcanic plateau, located at an average height of 6,562 feet, which confines the Yellowstone Lake, which lies over a consistent ground depression which makes the lake reach a depth of 322 feet at its deepest point.

This central plateau is enclosed to the north, east and south by mountain ranges that reach 13,123 feet in altitude, being their highest points subjected to the power of the ice and snow. Towards the west, the plateau becomes gradually lower and lower, reaching the alluvial plain of the Snake River through the lands of Island Park.

The Yellowstone River, natural drain of its homonymous lake, has carved a tremendous and beautiful canyon that is a reference point that visitors must watch. Plummeting through ochre-rock plains, sprinkled by pines and fir trees, the river has to go through two sharp declines, of 112 and 308 feet high vertical drops. The river water flows through a 20-mile narrow gorge, with very steep walls.

Modern techniques of "Photo-interpretation" by satellite have allowed us to detect, in the central area of Yellowstone the largest volcanic caldera in the entire world, 100 times larger than the one formed because of the explosion of Krakatoa Volcano in Indonesia. This enormous depression, difficult to see because of its significant proportions, lies between the Yellowstone Lake and the Madison River. Along with this caldera, Yellowstone registers the presence of roughly 10,000 different thermal manifestations, mainly thermal springs and geysers, which represents the biggest concentration of volcanic phenomena in the world.

Yellowstone acts as a hinge between the northern and central massifs of the Rocky Mountains, while establishing the waters separation between the Atlantic and Pacific Basins. This fact facilitates the existence of large magmatic storage underground caverns, as well as the periodic release of materials towards the surface.

This way, throughout the last 2 million years, the magma -molten mass of silicates with little quantities of steam- has filled in numerous occasions huge caverns underneath the Yellowstone Plateau. Millions of pounds of this material reached the sunlight throughout 3 different eruption cycles. The last cycle began 1,200,000 years ago, and it is the one which conditions the current orography.

The geysers represent one of the main curiosities in the Yellowstone National Park. The magmatic-origin steam, called "juvenile water", mixes up with the filtered waters from the surface. Both elements are heated up due to the convective heat of the magma, which tends to rise. If it doesn't meet any barriers, the hot water reaches the surface and forms a thermal or hot spring.

On the contrary, if it does meet a barrier, the mix heats even more and more until it reaches extremely high temperatures, producing a strong steam pressure, launching the water column to the exterior. The eruption decreases the pressure, until a new temperature increase provokes the repetition of the cycle.

The most popular geyser in Yellowstone Park is the one called Old Faithful. Every one and a half hours, with rigorous punctuality, releases a powerful water column that elevates more than 165 feet from the ground. In the geyser surroundings you can appreciate the limestone concretions, disposed like circular overlapping terraces, which are the outcome of the decantation of the minerals dissolved in the water jet.

The most popular hot springs are located in Mammoth, just in the northwestern border of the Park. Their waters deposit more than a ton of travertine, which originates a magnificent cluster of cascading terraces. When the travertine deposits, it blocks the water outputs, emerging new water springs that add complexity to the whole thing.

The area of Mud Volcano, near the Yellowstone Lake, encloses a series of boiling muds. Moreover, in its surroundings, you can find thermal pools and springs, with water and terraces of vibrant colors: emerald green, brown, yellow and ochre, sometimes at scarce distance one another. This chromatic variation is due to the algae which occupy the waters, of different species depending on the temperature and salt content in the water.

The moment you access the Yellowstone Park, the gamekeepers put in your hands a brochure with the following headline: "Warning, you are in Bears land!" Depending on the traveler's mood, this information can brighten their day or provoke their immediate escape.

Yellowstone contains 2 species of bear, the Black Bear and the Grizzly Bear. The former one, smaller than the Grizzly, is a pacific vagrant of twilight customs that eats all kinds of vegetables and meat, including the leftovers of the tourists' lunch. With the exception of a female Black Bear with her cubs, it isn't dangerous but it's always convenient to keep safe distances.

On the contrary, the Grizzly Bear, that can weight up to 1,100 pounds, is unpredictable and there are attacks each year. To avoid surprising the animal, a moment when its reaction could turn very violent, the visitors that walk through the park take with them a small rattle to alert the bear of human presence.

Yellowstone encloses a notable population of wild American Buffaloes, moving freely through the Park. The story of the decline of this species is particularly sad. At the beginning of the 19th century, there were more than 50 million individuals. In order to reduce the Indians by hunger and clear up the prairies to stop domestic cattle's wild competitors, the European settlers killed thousands of thousands of Buffaloes, to the point when they were endangered. The Yellowstone forests offered shelter to small herds and thanks to them, the species started to recover and there have been multiple projects across the country to try to reintroduce buffaloes in other areas.

Yellowstone Park suffered a frightful fire in 1988. The flames isolated thousands of acres. Despite this, observers at the park didn't show any signs of alarm. In fact, they let the fire to continue spreading through the park. This attitude only changed when the fire threatened neighbor forest areas, external to the park. Once more, Yellowstone, with a nihilism hard to understand, is setting standards in the conservative doctrine.

After long studies and debates prior to the fire, people came to the conclusion that fire is a natural element that plays a role in the forest ecosystem and therefore, it should be allowed as long as it doesn't threaten human lives. The fire in 1988 gave the opportunity to contrast these ideas. 30 years after the fire, it looks as the people who thought it was the best to let the fire spread throughout the Yellowstone Park might have been right. The process of rejuvenation and recuperation of the forest has been extraordinary good.

Yellowstone encloses a "Romanticism aura" that somehow is foreign to all of those who decide to adventure into the corners of the state of Wyoming looking for loneliness, caused by the open spaces.
John Murray, Park gamekeeper, stated once: "Yellowstone is the park that every American father dreams of visiting with his son one day."